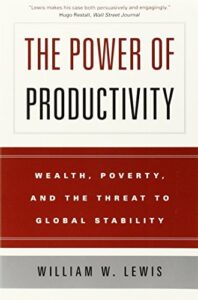 The Power of Productivity: Wealth, Poverty, and the Threat to Global Stability

Selected texts from his Prologue:

For the purpose of helping you decide whether you want to read more than the first page of this book, I am listing here my ten main conclusions.

Two, beyond macroeconomic policies, economic analysis usually ends up attributing most of the differences in economic performance to differences in labor and capital markets. This conclusion is incorrect. Differences in competition in product markets are much more important.

Three, the Washington Consensus of the 1990s argued that such elements as flexible exchange rates, low inflation, and government solvency are the critical factors in economic health. One factor that was profoundly underestimated was the importance of a level playing field for competition in a country.

Four, many people believe that the educational attainment of a nation’s current labor force is responsible for the success or failure of its economy. A high education level is no guarantee of high productivity. The truth of the matter is that regardless of institutional educational level, workers around the world can be adequately trained on the job for high productivity.

Five, many people see access to capital as the determining factor between a productive growing economy and one that is not. Therefore, they feel that if rich countries sent capital pouring into poor countries, the poor countries would become richer. If poor countries improved productivity and balanced their budgets, they would have plenty of capital for growth from domestic savers and foreign investors.

Six, most people consider “social objectives” to be “good.” Import tariffs, subsidized loans for small businesses, government disallowance of layoffs, and high minimum wages are all examples of economic policies designed to achieve social objectives. These measures distort markets severely and limit productivity growth, slow overall economic growth, and cause unemployment. Rather than support these measures, it is better to level the playing field, create a bigger economic pie, and manage the distribution of that pie through the tax code for individuals.

Seven, most people don’t recognize the destructive power of big government on economic development. Big governments demand big taxation. When part of the economy is informal, and untaxed, the burden falls heavily on legitimate businesses. This is a burden today’s rich countries did not have when they were poor.

Eight, many people think the salvation is in the elites, the educated technocratic, political, business, and intellectual groups, who cooperate to manage economies through government. The elites are responsible for big government. Particularly in the poorer countries, the elites license business activity, control international financial and material goods flows, promote unaffordable social welfare systems, and favor government-owned businesses. Too often, the elites reward themselves richly.

Nine, some people think that nations should protect their own industries but also ask outside nations for capital. This is wrong. Direct investments by the more productive companies from the rich countries would raise the poor countries’ productivity and growth rates far more effectively than sending them money.

Ten, many people think that production is all that is needed to create economic value. This is why government sometimes protects businesses, regardless of their performance. They fail to make the link between production and consumption. The goods produced have value only because consumers want them. If they don’t want them for some reason (such as high price), the business producing them needs to die. Only one force can stand up to producer special interests—consumer interests. Most poor countries are a long way from a consumption mindset and consumer rights. As a result, they are poor.

These conclusions come from the studies conducted by the McKinsey Global Institute over the past twelve years. This work is based on how individual businesses—from state-of-the-art auto plants to black-market street vendors and everything in between—actually behave and perform on a daily basis. The understanding of an economy comes from the ground up rather than the top down; a grassroots view versus a bird’s-eye view. This book is going to provide the evidence and the arguments for my conclusions listed above.

You can find out more about which cookies we are using or switch them off in settings.

This website uses cookies so that we can provide you with the best user experience possible. Cookie information is stored in your browser and performs functions such as recognising you when you return to our website and helping our team to understand which sections of the website you find most interesting and useful.

Strictly Necessary Cookie should be enabled at all times so that we can save your preferences for cookie settings.

If you disable this cookie, we will not be able to save your preferences. This means that every time you visit this website you will need to enable or disable cookies again.